MEYER. Anatoly, what is your recent obsession with "for actors"? Everything is "for actors"! Dramatic Literature, Film Directing and now even the stage directions! Don't you understand that theatre needs good directors more than ever? I thought that you know better. You spent over twenty years in America, you should know, my boy. Did you go completely mad in your Alaska? If you will continue this trend, I will stop coming to your classes. Do you hear me? [ pause ]

Notes pages are for me; what is missing, what must be done and so on. I have those pages in every directory. I teach this class in the Spring 2002 and will try to connect it with the Film Directing Theory and THR221 Intermediate Acting I also teach (Biomechanics). I do not know, if I will use the Yahoo Online website. There are over 50 cyber-students who signed in already, but the online class is another fish and asks for more work! Even if I am to spent my winter break on developing it, I won't be ready...

Should the subtitle of the book be "First Spectator" -- Spectator as Director, Director as Spectator? Not just a book on directing!

Theory issue: Virtual Theatre is about the future of directing: Theatre of One!

*** Keep this "Five-Act" structure for all textbooks. Part V is the showcase. Acting One -- The Importance of Being Earnest, Acting Two (Biomechanics) -- 12th Night and Mikado, Acting Three (Method) -- The Three Sisters. And here, directing -- Hamlet! Go to the SHOWS directory and see the subdirectories.

It would be nice to write about DIRECTOR'S NOTES. Not in the program, but how to take and give notes to the cast and the crew.

Next: back to Title

PS. I have a problem. Very serious problem. If I have something on my mind, I think that I already wrote or said it. There are must a name for such a sickness. Most often it is not written at all, but nevertheless, I refer to it, thinking that I simply forgot the page, where I place it! This makes my students nervous and sometimes drives them mad. They try to find something that is not there (because it's in my mind only). I, on the another head, insist that it is there; and, if they prove that this is not there, I think that it is must be somethere else.
I thought about this strange personal phenomena, about it's phychological motivations. Why do I do it? Maybe because I patalogically afraid to repeat myself? But I can see a lot of repetions on my pages. You see, this principle has it's negative expression: I think that I didn't say something, when in fact I already said it many times!
A good editor could fix the problem righter easy, but I am no editor, my friends. That much I know about myself. I am not crazy.

THE DIRECTOR AT WORK -- textbook, to use for Part IV reading!

Stage Management Forms and Formats: A Collection of over 100 Forms Ready to Use

I. Spectator as Actor

[ There are three directories @ filmplus.org theatre-directing-related: Virtual Theatre, The Book of Spectator and Theatre Theory; I have to collect here all revelant pages. Plus, Total Directing (new) ]

[ no, I still didn't break the class into "lessons"! ]
FilmMaking for Actors
Stage Management (7th Edition)

Stage Managing and Theatre Etiquette: A Basic Guide A practical, accessible reference for one of the most complex jobs in the theatre. Linda Apperson's clear and concise resource leads the reader through the process of stage management from auditions to closing night.

Sound and Music for the Theatre: The Art and Technique of Design, Second Edition

This is the only comprehensive text that discusses the aesthetics of sound design for the stage. It is a practical and comprehensive guide to the field of sound design, covering the designer's relationships within the theatre community and detailing the process of sound design. The focus is on design approaches and techniques, rather than equipment operation.

This popular book describes in detail a stage manager's job. It provides those just starting out in the profession with a solid grounding in theatre stage management practices and procedures. The disciplines of lighting, set design and sound are discussed but the main focus is the management of these elements and the processes and scheduling that go together to provide effective results. Chronologically following the production of a play, the book starts with pre-production planning and progresses to opening night. With easy reference checklists and a full glossary, it is the essential guide to stage management.

The activities of theatre managers vary according to the size of the theatre, whether it is a repertory or non-repertory theatre and the structure of the management team, but typically include:

planning forthcoming events by: using market knowledge of their audience's taste; ensuring a balance between different types of productions; being aware of which productions have been well received elsewhere; accepting new work offered by reputable production companies; taking the opportunity to have well-known actors appearing at their venue;
liaising and negotiating with production companies to plan the programme of work;
getting involved in artistic direction and commissioning new pieces of work, especially in repertory companies;
carrying the educational work by promoting arts participation in the community. This may include visiting schools, colleges, community centres and youth clubs to encourage the public to engage in professionally led artistic activities. It is the theatre manager's role to promote and support these initiatives;
taking responsibility for all staff in the theatre, often heading a management team, the members of which deal with specific areas such as marketing, finance and artistic production;
working with the board of the theatre;
attending marketing meetings;
dealing with the budget and exercising ultimate financial control; negotiating with charities and funding bodies who provide financial backing for many theatres;
lobbying at arts-related conferences;
networking with local industry, educational organisations, relevant bodies and the public;
keeping in touch with other theatre managers and producers in order to stay abreast of developments and new productions.

In Moscow, city of such stage greats as Konstantin Stanislavsky, Vsevolod Meierhold and Alexander Tairov, theater schools come and go. But the School of Dramatic Art, founded by director Anatoli Vasilyev in 1987, is one that is certain to remain. Since its inception 12 years ago, the School of Dramatic Art has embodied Vasilyev's vision of melding Russian and European theatrical traditions. "Vasilyev has exhausted all that Russian theater has to offer and gone beyond its limits to initiate an unprecedented creative system," says critic Vitas Silunas. "He is the real heir to Stanislavsky."

Vasilyev's dual inheritance--grafting European branches of theater on to a native Russian stem--has resulted in a form of drama distinctive for its amalgam of the Russian way of actors' self-identification with characters they play, and the European style of alienation from their characters. Vasilyev first garnered international acclaim for his 1973 production of Solo for a Clock with Chimes. It was a lyrical piece about the beauty of old age, about the lifelong love of three 65-year-old men for the same woman, and a youth who has yet to perceive the sweet sadness of life. Even as he broke new dramatic ground in that production, Vasilyev kept the thread of Russian tradition alive by working with actors from the Moscow Art Theater. Subsequent productions bolstered Vasilyev's reputation as an innovator. Among the most conspicuous were two plays by Victor Slavkin: A Young Man's Adult Daughter--about the frustrated middle-aged Russians in the late 1970s who nostalgically recall their youth in the 1950s--and Serso (The Hoopla), in which a group of '80s characters fruitlessly try to relive the past with costumes and letters found in an old house.

Vasilyev opened his School of Dramatic Art in 1987 with a provocative production of Six Characters in Search of an Author, the absurdist drama by Luigi Pirandello. Vasilyev's version was the director's clearest statement to date of his idea that we are all characters in search of God. Its success made Vasilyev an international celebrity, and led to invitations to direct and teach throughout Europe. He continues to direct daring interpretations of Russian classics at the Comedie Francaise in Paris and theaters in Italy, Germany and Belgium.

But some critics see a danger in Vasilyev's grand ambitions. "He does not want to accept what is," says a longtime admirer of Vasilyev's work. "He has to create something equal to Plato and Pushkin--and a failure might spell tragedy." Wrote reviewer John Freedman of Vasilyev's latest production, Pushkin's Don Juan, playing at the School of Dramatic Art: "It bears all the marks of Vasilyev's 1990s style, declamatory technique, heavy performances by the actors and exquisite use of lighting and space... It is the journey, not the destination, that is important."

Still, the lighthearted scene in Don Juan when Leporello is taking Polaroid snapshots of the audience and is handing them the pictures, while Don Juan is recalling his past adventures, breaks the aloofness of Vasilyev's artistic quest. A production of Don Juan--a piece based by the greatest Russian poet on a popular European story--seems a logical and successful bridge for Vasilyev to extend from his Russian shore to the European one, and create a performance aesthetically palatable both to Russia and Europe.

I must find some place to write about Russian directors, in Theatre Theory, like Dodin or Taganka (Lubimov) in RAT?

No "Vasiliev Page" (connect to Grotowski and/or Shaman in Method Acting). 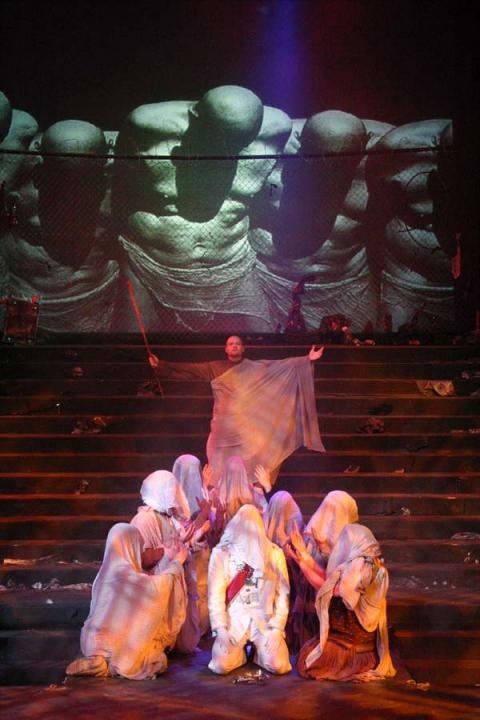 * Use http://vtheatre.net to link to Virtual Theatre pages!